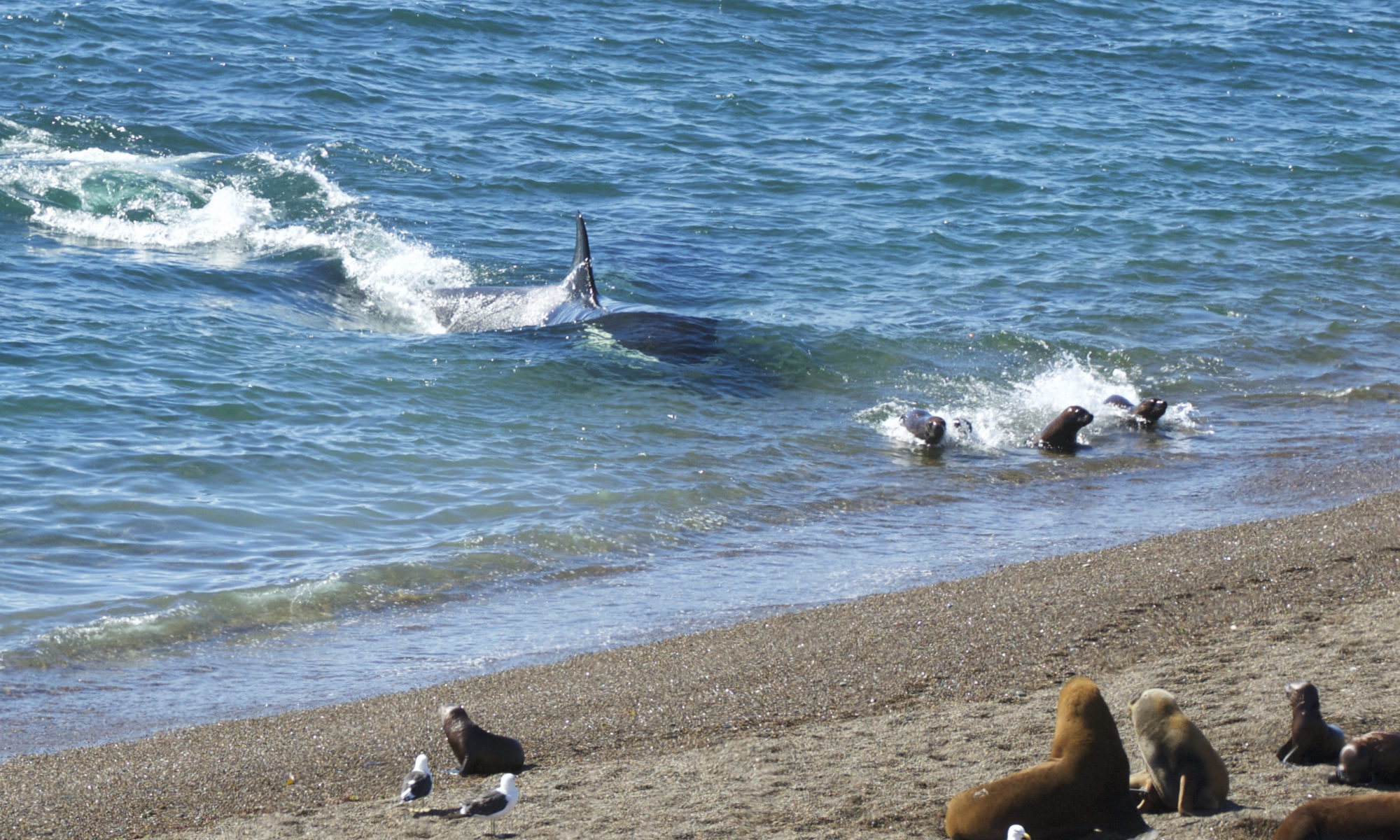 Punta Norte Orca Research is an international non-profit organization established in 2004 and based on the Peninsula Valdés, Chubut, Argentina. We are a wildlife conservation and science organisation.

Our mission is; To scientifically study and better understand the unique population of orca in this area, including their distribution and foraging techniques. We seek to educate the public about these animals and their delicate environment and to create a legacy of increased protection.

In 2019, PNOR had a restructuring and as part of that our logo was revised in 2020 to show the key elements of the research we conduct; i.e, the orca who intentionally strand at Punta Norte and the sealions who are so often their prey. We chose a ‘line’ style in order to allow the logo to blend in with the ‘environment’ of the background as a way to reflect our commitment to research that has respect for the animals and the unique coastal habitat of Punta Norte.

She has created photo identification catalogues for New Zealand, Antarctica, and Papua New Guinea and has published various scientific articles on orca and other marine megafauna. Her research specialises in foraging behaviour. She has been instrumental in rescuing stranded orca around the world and is a strong advocate against the keeping of cetaceans in captivity.
Visit Website

Co-Founder PNOR. Juan is the Principal Researcher for our project. Not only is he a photographer, but he has lived for over 40 years at Punta Norte and observed more than 2,000 orca attacks on various prey. He has observed orca in a wide range of locations around the world, including in the waters of Antarctica, New Zealand, Norway, South Africa and the USA in order to compare foraging behaviour.

He is the owner of the boutique accomodation available at Estancia La Ernestina, Punta Norte, which hosts PNOR. You can join him during his field research season by staying at this unique wildlife experience where a range of Patagonian landscapes and animals can be observed. The two key seasons for wildlife are February-May and October-November (see our Frequently Asked Questions for more details).
Visit Website

Jorge joined PNOR in 2008. He is an avid wildlife photographer and as a naturalist and tourism businessman he guides guests to view and photograph wildlife around the world, specialising in top-predators such as puma, jaguar and orca. He has worked on several documentary productions, for BBC, ZED and National Geographic. Jorge has been visiting Punta Norte since 2001 and has documented the orca exhibiting a range of behaviours including attacks. His work with conservation extends to include collaboration with several projects in different regions of Argentina. Jorge also administers the PNOR social media accounts and is our main coordinator for visiting film & documentary crews.
Visit Website

Joe joined PNOR in 2019 and is a scientist and wildlife veterinarian. He has worked with, advised on and researched orca in both the northern and southern hemispheres.  He is the Science Director for the University of California, Davis, School of Veterinary Medicine, Wildlife Health Center’s SeaDoc Society Program in Washington State, USA and has been working on wildlife and ecosystem health issues in the Pacific Northwest for almost two decades. Joe has published numerous scientific papers on diseases that impact wildlife such as harbor seals, river otters, porpoises and orca. Joe also hosts Salish Sea Wild – and has an episode specifically on the research he is doing on orca.
Visit Website.

Gaby has been involved with PNOR as our Educational Coordinator since the inception of the project in 2004. She facilitates the naming of the orca by the local school children and keeps them informed about the progress of the orca’s lives. Gaby lives in Puerto Pirámides, the only village on Península Valdés, where she is the President of the Wild Earth Foundation (Fundación Tierra Salvaje). She was instrumental in changing the laws surrounding the keeping of orca in captivity in Argentina and remains a strong voice against cetacean captivity. Gaby is the coordinator for the cetacean stranding and disentanglement rescue teams for the Chubut area and has published about this and other aspects of cetacean management.
Visit Website